I’m FINALLY finishing my Spain series. After conquering Barcelona, Valencia, and Seville… and eating ALL the food, we were off to Madrid! Once again we took a very early train so that we could see as much as humanly possible. Because who needs sleep? Am I right?

First stop was The Museo Reina Sofia, the modern art counterpart to The Prado. We chose this museum because it has an exhibit housing one of Picasso’s most famous murals, Guernica. The exhibit was absolutely stunning. I wasn’t allowed to take pictures but it looks like this:

Except better. Obviously, it’s more magnificent in person. It also takes up the whole wall. Imagine me standing in the lower right corner only covering that one dude’s foot.

We then walked through the other exhibits and got to see another personal favorite, Salvador Dali. I’m dying to make a trip to Figueres, Spain someday to see the Dali Theatre and Museum.

After a great morning of art we were famished but didn’t have a lot of time. So another jamon sandwich it was! I still can’t get over how something so simple is so frickin’ good. It must be how they dry age their prosciutto. We were ready to start our trek through Buen Retiro Park, which is Madrid’s version of New York’s Central Park. There were so many beautiful spots to stop at. One of my favorites was The Palacio de Cristal.

This palace made of wood and glass was built in 1887 for The Exposition of the Philippines, then a Spanish colonial possession. After marveling at its beauty, we wandered past another grand pavilion, Palacio de Velazquez before making our way to Retiro Pond.

Since we had already conquered rowing in Seville, we skipped it this time. But it still looked fun! We then left the park and wandered past the Puerta de Alcala, a grand archway, on our way out of the park when I spotted them. Twinkly lights. I told you before and I will tell you again, nothing does it for me like twinkly lights. They are like fairies dancing on my soul. Oh, and pitchers of sangria never hurt, either. So of course we had to stop.

On our walk back to the hotel we walked through Plaza de Cibeles, which is an iconic symbol for the city of Madrid. It also happened to be one of the pictures on my vision board. So I snapped a pic. At least I’ve visioned one of the things on my board into reality!

We freshened up at our hotel and headed out for dinner in the Plaza Mayor. We chose a cute restaurant called El Soportal. We knew that in the touristy areas we probably wouldn’t get the best food, but we were pleasantly surprised! We had an amazing beef carpaccio and, just to change it up a bit, some Priorat red wine instead of our traditional rioja. Rioja still wins in my heart and on my taste buds but I’m always happy to try something different! 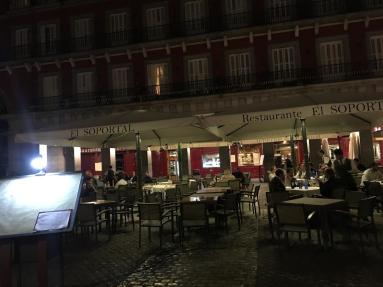 Some of the reviews on this place weren’t the best about the service, but we actually had a great time! (And you can see by this pic we practically closed the place down.) I think our server may have been enamored with the fact that we were from Los Angeles because he gave us the star treatment. We even got this as a parting gift.

Apparently, in Spain it’s tradition for restaurants to serve you a shot of liquor after dinner as a special treat. This was some sort of Spanish limoncello. And it was terrible. But, hey, it’s the thought that counts. Right? The chocolates were great, though!

The next day we got up to do more exploring. We visited Museo Cerralbo, the house of the 17th Marquis of Cerralbo and his massive art collection. It has a grand staircase, library with so many books you need a ladder, and a golden ballroom, of course. What home would be fit without one?

Next we just wandered. We Saw the The Temple of Debod, an ancient Egyptian temple that was dismantled and rebuilt in Madrid, Almudena Cathedral, and the gorgeous Royal Palace. Madrid is truly a grand city. The buildings are the most ornate and everywhere you look is spectacular. Throughout our meanderings we did manage to have a jamon sandwich as a snack. (We couldn’t get enough.) But now we were STARVING.

For our last night in Spain, we headed out to the Latin Quarter, a cute area with winding streets and many restaurants known for tapas.

We chose Taberna La Concha for our dinner and it was OUTSTANDING. It’s this tiny hole in the wall with just a simple bar upstairs. You walk downstairs to a very small dining room with only about fifteen tables. But oh do they nail the food. The must have drink is their Vermouth cocktail. I’d never had a cocktail made from just vermouth so I didn’t know what to expect. But the reviews we read prior had said that was their signature drink. And it was SO. FREAKING. GOOD.

We enjoyed many tapas including a salmon green salad with soybean sauce and oxtail cannelloni, but the stand out was probably the lentils with carmelized duck and foie.

It was so rich and flavorful, I wanted more!

Afterwards we walked around the neighborhood taking in the sights as we digested our meal. It was a unique atmosphere that evening because Real Madrid was playing Bayern Munich in soccer, or should I say futbol? So everyone was crowded into bars and restaurants to watch. I’m not the biggest soccer fan but even I got really into it! Our first stop was 47 Cocktail Bar. It was a cute place with a wide selection of concoctions and the game projected onto a big screen on the wall. 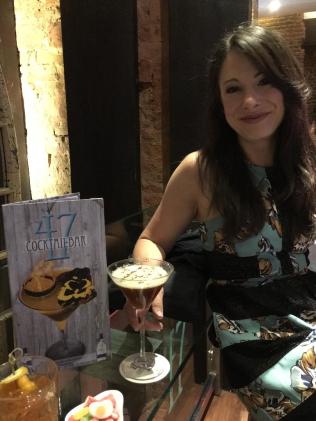 We decided to bar hop on our way back to the hotel while watching the game. It was very exciting to crowd into the cafes in quaint alleyways near Plaza Mayor and cheer with the locals. It was a great game! After double overtime it ended in a shoot out and Madrid won!

And with that our time in Spain came to an end. With one last look at the Gran Via near our hotel I said, “Goodbye for now, but not forever.” The food, the art, the entertainment… Spain is definitely a place I will be back.

I'm a Certified sommelier and creative writer who considers a bottle of wine just as much a work of art as a Pulitzer prize winning novel. View all posts by Alissa Bica